A long time ago in a classroom far far away, four architecture students found themselves in a bit of a pickle.

Their idea for coLAB was creative and fun but sometimes their thoughts were fickle.

It is the year 2043, due to the excessive waste of oil in the past century to everyones knowledge the day has finally come that the oil has run out. Manzoni is in his lair, the top of the rotunda, located in the Mazoni Gardens overlooking his empire, his hunt to get the cars moving again has begun. The few sparse areas left untouched by Manzoni are the only safe zones left to travel through. 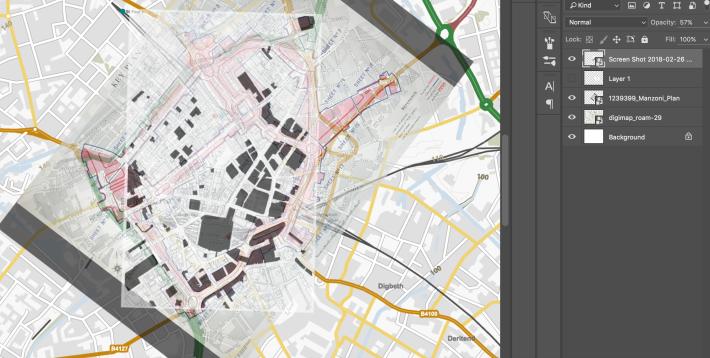 James Roberts on Manzoni and the “process” of re-planning?

“Manzoni I got to know very well but he was, he was, he had no interest in architecture at all, [no interest in] aesthetics at all, he wasn’t interested in people or pedestrians. It was cars, lorries, getting things through and out again and so he did considerable damage to the heart of Birmingham I think but there should have been a lot of tender loving care after the war” (Roberts, interviewed 2009).

Herbert Manzoni was the creator of modern Birmingham. From 1934 to 1963, he held the powerful position of city engineer, surveyor and planning officer.

He instituted the inner ring road and subjected the city to vast swathes of comprehensive redevelopment encircling the city centre.

His legacy is of very ambivalent worth and, since the 1980s, we have been trying to correct much of the damaging parts of it.

Manzoni had little regard for architectural inheritance.