From the outside, the abandoned Palladium Cinema looks like the grimmest of all wrecks. A narrow, grimy white box that rises up high into the sky, it seems to cast a gloomy shadow over the surrounding street. Yet venture inside and its abandoned interior tells a different story.

Built in 1911, the cinema functioned for most of the first half of the 20th century, even being popular enough to expand in size in 1922. It wasn’t until the 1960s that business began to tail off and the screen was removed. Even then, it continued to draw crowds as a bingo space, right up until 1979. Then, on the cusp of the 1980s and a reviving British economy, it finally closed its doors. Nearly 40 years later, the abandoned Birmingham cinema’s doors remain closed. 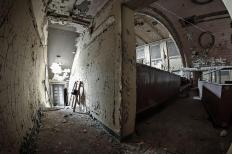 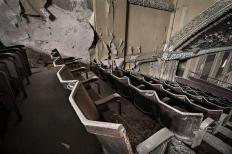 Deep beneath the Longbridge factory lies a vast network of tunnels stretching out like a spider’s web to every corner of the city centre. Built during the dark days of the Blitz and the Battle of Britain, these forgotten tunnels were used by female munitions workers, working beyond the reach of the Luftwaffe’s bombs.

Known as ‘shadow factories’, these underground lairs employed tens of thousands of Brits during the war’s height. Twenty-six were active in Britain during the early 1940s, and were vital to the war effort. Following the conclusion of World War Two, the Longbridge Tunnels were mostly stripped down and abandoned. Fast forward to the present, and only a few remain; many of them earmarked for redevelopment rather than historic preservation.