Before the session, we set the task of continuing to examine the results we had so far from the survey which had been sent out to all part-time students, to identify any critical correlations that had arisen.
The purpose of this task was to establish a series of hypothesis based on our themes of Network, Time, Happiness and Travel, as well as produce a few generic questions that were to act as entry points into more insightful questions during our interview process. Even though the interview will be carried out in a semi-structured manner, this will develop into more of a discussion than an interview. The questions are spontaneous and adapt to the answers given by the participant, the generic questions established on these apparent relationships will be used to ground the interviews ensuring we stick to our central themes and extract the information we require. We were also asked to look at a series of video tutorials based on the technique of analysing statistics known as the T-Test, which would be the focus of the session and be used to analyse our results and attempt to support some of the hypothesis we had constructed.

At the beginning of the session, the framework for the video diaries was finalised and issued to the volunteers that had demonstrated an interest so that they had as much time as possible to document their life as a part-time student before the deadline of 17th November. The session then proceeded with the explanation of the T-Test and Chi-Squared test, to identify how these analytical techniques can be used, before testing an example.

The T-Test checks if two means (averages) are reliably different to each other. Initially, a hypothesis is established that can state that there is/is not a significant difference between two sets of data, and the T-Test establishes whether this hypothesis can be either accepted or rejected by obtaining the T-value from an equation and comparing it to the Z value that shows a confidence interval level. If the Z value is greater than 1.96 (95%), then we can confidently make the hypothesis. The benefit of the T-Test is that it allows two sets of data to be tested, such as levels of happiness based on the number of working hours. 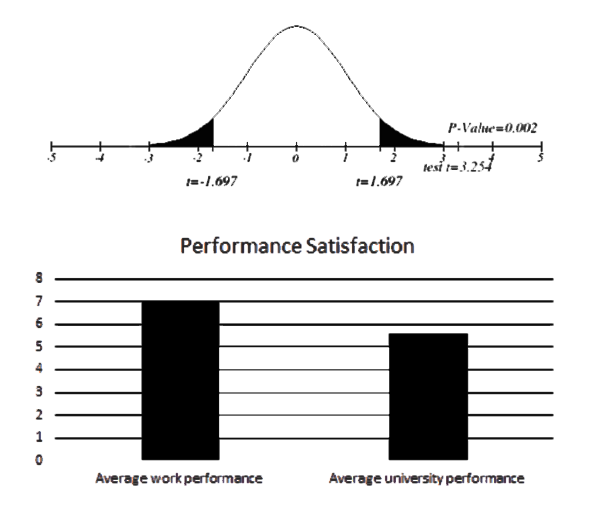 The Chi-Squared test only allows to test one set of data but requires a binary opposition in regards to the subjects of the data, for example, introverts and extroverts, undergraduate students and postgraduate students. The test splits into three sections. The first section involves the sorting of the data based on the sliding scale and the two different populations. The second section then calculates the expected value for that specific relationship before the third section then obtains the Chi-Squared value. This value is compared to the Chi-Squared table which again relates to the 95% confidence interval as well as the degree of freedom, which is calculated by the number of categories minus 1. Similar to the T-Test, if the Chi-Square value calculated is higher the value in the table then the null hypothesis can be rejected. 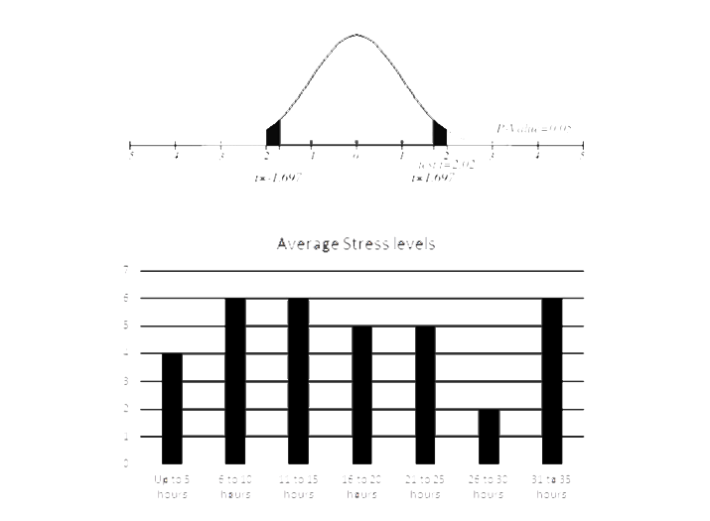 Through running a series of these statistical tests, we were finding that in most cases there was no significant difference between the two sets of data which has resulted in us unable to reject the null hypothesis. In regards to some hypothesis this was confusing due to our expectations based on our own experience as Part-Time students, as well as feedback from others, with such an example being, Is there a significant difference between the number of hours spent on university work and satisfaction with social life. We believed that a relationship a relationship between these two sets of data would be reflected, however, the T-Test calculation demonstrated that the null hypothesis could not be rejected. Evaluating this result, as well as other hypotheses where we were surprised not able to reject the null hypothesis, we concluded that the sample size was too small and that larger sample size would have produced more accurate results that better reflect the experiences of a part-time student. In addition to this, reviewing the questionnaire in regards to being able to transfer the data to the T-test / Chi-Square Test, we concluded that some questions could have been worded/structured better with sliding scales that would have allowed for more avenues for exploration within our statistical analysis with more conclusive results.