Having already begun exploring digital fashion with experimentations in 3D printed jewellery, when joining the Digital Fashion module I looked forward to returning to some previous ideas I’d had about digital production. My previous experiments had remained underdeveloped, and whilst there may be aspects of them which I may utilise I hope that from the working with students of different disciplines I can create a new project. 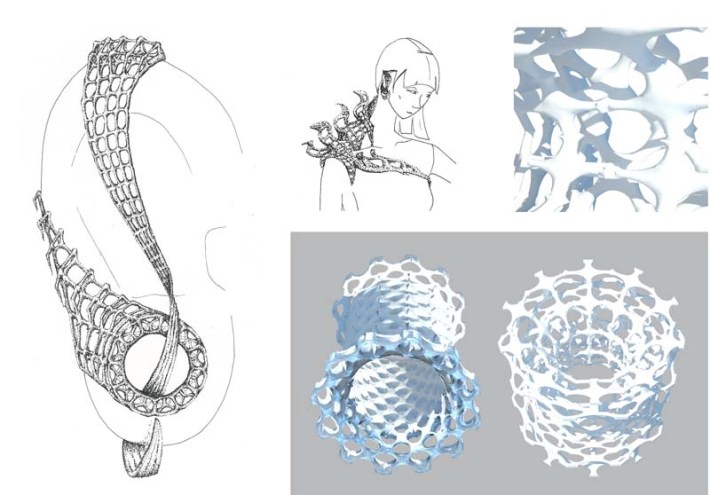 Adornardio; Previous experiments in 3D printed jewellery; utilising parametric to create a parasitic garment which utilises and restricts to body in order to ‘grow’.

Following the introduction session I looked into 3D printed chainmail. Due to the practical difficulties I’d had with printing items for my earlier Adorno project I was initially interested in how this technique makes printing of larger items in small machines possible by breaking it into interconnected parts. However looking at Kinematics by Nervous System I became more interested in how the fluidity of the overall item can be controlled by varying the size of its individual rigid parts. 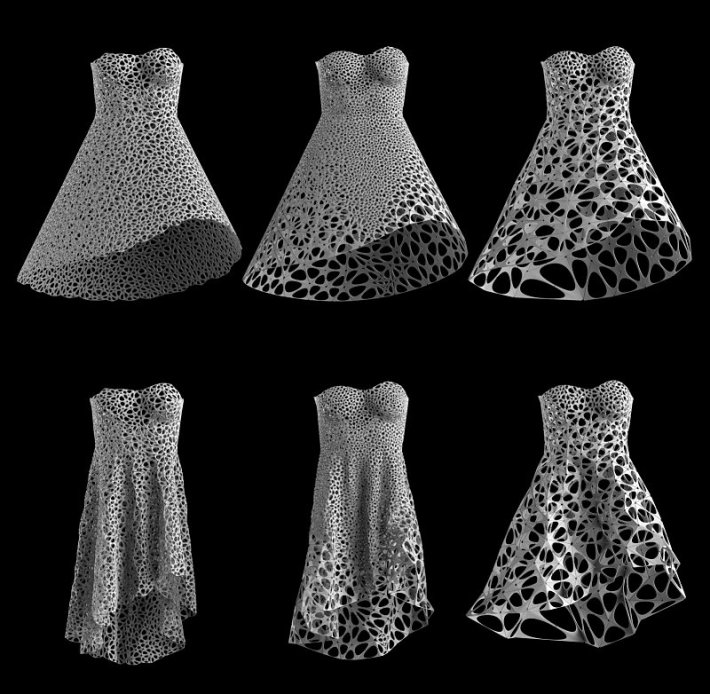 The aim of my experimentation in Task 1 was to create a sample of fabric made of rigid parts that had a degree of movement to it, in order to understand how such a fabric works and can be controlled.

First I made a small sample of traditional style chainmail using jewellery findings. Each rigid part acts as a link without the need for hinges or separate connections as seen in the Kinetics pieces. The result is a free flowing fabric which will drape over any surface; this is possible due to the ratio of void to solid of each link creating the possibility for many degrees of movement between parts.

I also modelled a small sample of traditional style chainmail, with links of manipulated surface. Though varying the size of the individual parts of this traditional chainmail would probably lead to a variation in the flow of the fabric in would also lead to large voids, making it less versatile if it is to be used to make garments.

The next sample I made was made of solid components of equal size and shape with separate hinges.

Using triangles meant that the size and shape of the components could be controlled in a straight forward manner; in my second sample I made a pattern from simple extending the lengths of some of the triangles. Each component fits to another along sides of the same length, allowing for straight forward production.

Areas of the fabric made up of larger components were more rigid than the flowing parts created in the areas made up of smaller components. As the hinges were small in relation to the component size rather than simply allowing movement in a single plane there is additional twisting between components. Furth developments would look to control this in order to create a fabric which can be made into a garment whose rigid components have the potential to distort the body and flowing components that work with the movement of the body.