Bournville was planned as a social city, probably the first community where a “fine grained” (Sarkissian, W and Heine, W p.13) social mix was planned from the start. From the outset George (Cadbury) wanted to create a mixed community, a mix of social classes and occupations. To what extent has this original planned intention survived in Bournville?

Social Mix: The Bournville Experience (Sarkissian, W and Heine, W 1978) is a study about the changes to the social mix from when the estate was originally built – a study of Englishness beneath the veneer of Bournville’s architecture. The results of this study showed that in general people were not concerned about social mix either positively or negatively but features of their environment such as attractiveness of their homes or their neighbourhood around them were important considerations for them.

The re-run of the survey is to look at whether there have been any changes to the social mix since 1974. In general as a society we have become more insular in the way we live – less associated with the areas in which we live and the people who are our neighbours. The internet has become the new social tool. Bournville has a model of social inclusivity, asking this survey again will give a broad basis to see if the original planning in Bournville is still as strong and consistent. 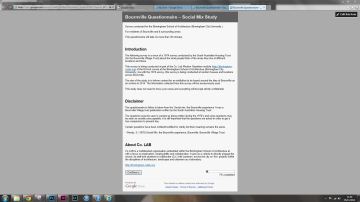 The survey for 2013 was produced in both digital and physical format, but it became apparent that the online survey was the easiest way to gather the information required for the largest number of people; this was due to the extensive nature of the original survey to do it physically would of taken a lot of time and organisation. This would also provide an interesting dynamic of the survey of the analogue world being completed physically and in 2013 digitally, something that would be reflected over the whole project.

The Bournville Social Mix survey went live at the start of November 2013 and quickly gathered responses thanks to the help from local organisations and companies publicising the survey across the city of Birmingham and in Bournville. Particular help came from the Bournville Village Trust the original surveyors in the 70’s who placed a main heading on their website.

We were clear on the issues of the survey when publishing and put enough appropriate messages to show that the survey came from a source and was largely unchanged. This still caused a little of uproar amongst some residents who responded who didnt seem to realise the nature of the survey even after the disclaimers. Largely though the survey was successful and we received a huge amount of responses, similar to the amount of the original document.

The story that came from the survey is how similar it is to the 1970’s survey in responses about the physical environment of Bournville, they were so similar it would be hard if you removed the date to see what the difference was. People still mention in their responses environment and quietness as the main feature of Bournville they love.

The differences came where social connections are made between each other, the influence of longer working hours and the internet is clearly felt when talking to each other. These results are open to interpretation as to what they are saying about the relationship between each other. It could just be the dynamic of asking people who are a part of the online world that they are more fragmented in their relationship. 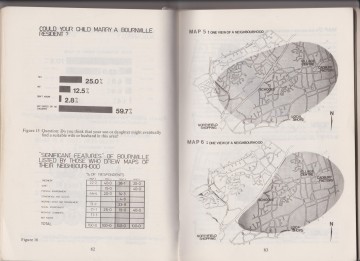 To reflect the survey properly I have taken on the aesthetic of the original survey and other ways of producing infographics from the 1970’s in a way of producing information in modern times.

The hand produced nature of the original text used stencils on layout paper with hand drawn tables and layouts. Utilising the precursor to desktop publishing, Letraset/Letrotone to add a layer of pungency of the key information. All of this gives a beautiful aesthetic and a care to the information rather than digitally produced tables and documents from an excel document. This aesthetic I brought forward in the final drafts of the survey.

My first draft of the survey broke the story up so each year is on a different sheet with a similar aesthetic to each to allow you to directly compare, statements similar to that in the source were placed in the middle to give food for thought. I think the total hand made aesthetic is difficult to control and incredibly time consuming but a physical object has far more weight that some digital produced document. 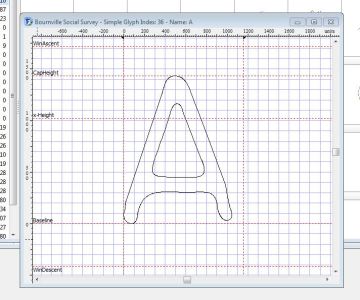 One way in which I have created my own version of the results was to extensively scan the document and create fonts from the text found and use the colour scheme and overall aesthetic that was also influenced by other 70’s infographics such as Graphis and the Open University to create a dynamic document that works to tell the story in a modern way.

The project now needs to be developed for potential use in the exhibition next year, something that I will be involved with the marketing of. I can see a need to develop a document to publish the results in comparison with the 1974 version in order to fully appreciate the story of the survey.

I think the way the two surveys are to be presented, with the age of the survey concealed on two large prints. Allows viewers to take away their own information from the raw information presented is the way that it could be developed for the exhibition.