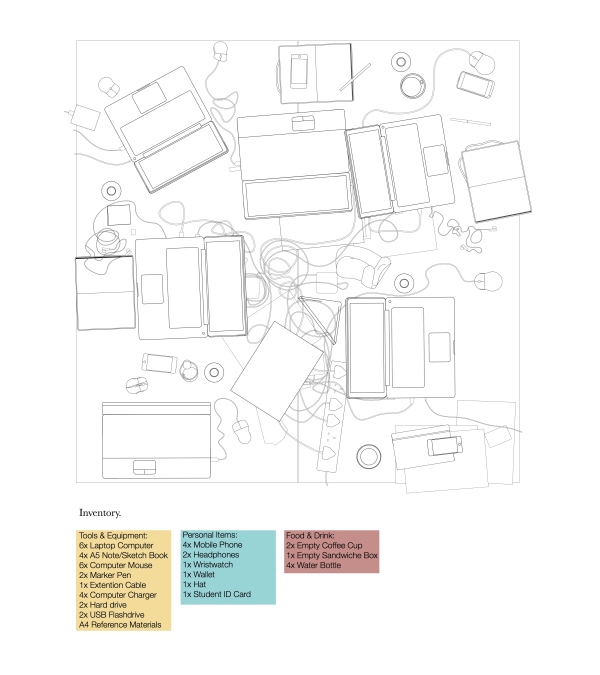 As Part of our study into the way that studio spaces are used I chose to look at the way that surfaces are utilised; at this stage analysing our own behaviour as MArch students, using the studios on a Monday on an informal basis. Several points became evident from this study, for instance; what we actually surround ourselves with is not limited to the tools that we as students may initially identify as necessary for studio work.  Over the course of the day we began settle in and personal paraphernalia was introduced to the working surface.  This was added to by the accumulation of food and drink on the tables, leading to the obvious expansion of each persons required working area.  This effect is illustrated by my own workspace over the course of the day as shown below:

Personal items and food and drink are pushed to the periphery of our workspace, claiming territory and indicating borders between individual work areas.  In plan these individual working territories become clear:

Unwilling to intrude into these claimed areas, students who join the group later work between them, in smaller working areas. There is also an interesting observation in terms of the depth of table space used.  The full depth of the table isn’t utilised, with the central unclaimed island being utilised as a service area.  This ‘no mans land’ is used for chargers, linking to an extension cable from a power source, and as a bin for food packaging and unused reference materials.  This is obviously due to our way of working in studios, on this day particularly laptop based.  A Laptop needs to be within reach, therefore has a specific range for each person. The vertical element introduced by the screens also provides a visual obstruction which may promote the use of the area behind to hide things away. The position of the power source also made us use an extension cable, effecting the table use by grouping all of our chargers together in one area.

I intend to further this study into how the BAAD students use their space, however with the evident lack of informal studio use throughout the course at the moment other studies such as how they work at home or in a professional environment may also be beneficial.  These detailed drawings both provide a useful resource for further study and allow comparisons to be drawn on how the students actually work.