The online survey has been live for just over a week, there has been an interesting response so far with some key themes repeating. The survey has also caused people to debate the morals of the question in their responses. The threads of a narrative are emerging but more responses are required to truly put it together.

Question 12 and 13, the majority of respondents at present have put themselves into the indefinite camp. This I would assume is rare occurrence in the modern world in a city, to be so content as to state that is refreshing and shows something of the Bournville mentality. 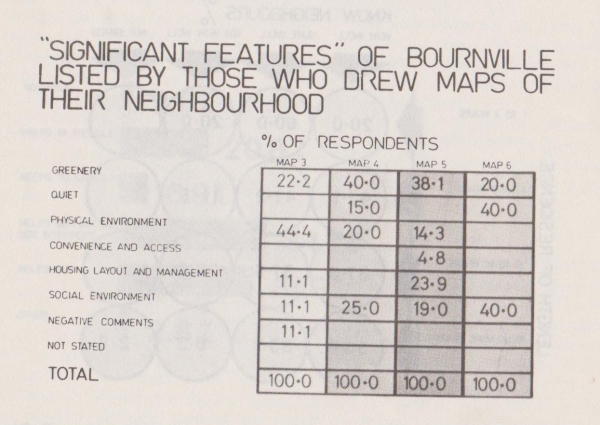 Question 19 (When you think about this area? What is it that sounds out in your mind about it?) the majority of respondents have come back with greenery as their main answer – similar to that of the original document that highlights greenery as the main response. The second response from most people is the social environment, but some are making issue of the cars within the neighbourhood a problem not seen in its inception.

Question 21 and 23, directly contradict each other about what kinds of areas Bournville actually is and what people think it should be. The majority of answers to question 21 state that it is a middle class area but when it comes to 23, every answer says that diversity improves their lives and improves their minds. It is interesting to see that this is the case in such an area as Bournville that could be seen even as anecdotal evidence states it as a white middle class place. Some responses do highlight BVT pushing the modern social aspect that is interesting.

An interesting statistic that the majority of respondents say there is an mixing of different people when compared to  question 31 where the largest influence in the community is Bournville Village Trust. They seem to have an active control on some of the residence much like the BVT design guide suggests.

The intimate ways of living and your neighbours can affect the way social interactions between people work effectively, the majority of respondents know their neighbours quite well that is the same with the initial survey. The interactions between them seem quite similar to other suburban neighbourhoods that you would not expect in city centres, being actively part of your social life seems to improve peoples lives.

Having seen the strong relationships between neighbours emerge, its interesting to see the number of people who seem some how lonely in where they live.  This is mainly new residents that do not have the social bubble around them and just a lonely as everywhere else.

At this early stage it has shown how much the architecture of Bournville has an effect on peoples lives, particularly with the open spaces. But there seems to be some creep of the modern world, but not as much as one would expect.