This week we were split into 3 smaller groups of around 6, where were able to explain and explore our own ideas more intimately and in greater depth. This allowed us to understand our own initial ideas deeply and understand others’.

Before being split into small groups we were asked to present an ‘elevator pitch’, where we were given one minute to explain our idea to the class. When in a group of new people, it is always interesting to listen to their ideas and understand different people’s work ethic.

In our small group we began by introducing our ideas by looking at each other’s project pages. We began by reading through our works and picking out the parts we liked best in each idea. There was a common theme of a ‘maze like’ installation. ­Laura’s sketches display how the ascension could occur within the maze:

As a group we liked Pablo’s idea based on the concept of the inverted pyramid. Using the centre of the maze as the loudest and darkest part, then slowly diffusing the different senses as the audience makes their way towards the edges of the maze by choosing which path to take by choosing which sounds and smells appealed to them most. This purification of the senses is a way to resemble ‘earthly chaos’ into the purification of the soul:

I looked into ancient Egyptian beliefs about the after life and how they believed in and entity called Ma’at, who weighed the hearts of the deceased against a feather; if the heart and feather were balanced, the deceased was able to move onto the afterlife. This concept works well with Pablo’s idea of choice and whether our decisions make us good. Chloe’s design included the use of projections, we decided we could incorporate this in our design to help differentiate between the light and dark parts of the installation.

Following on from sharing our own individual concepts, our discussion focussed on the specific aspects and how successful they may be. Pablo’s concept was very much a starting point from which we developed using ideas proposed by the rest of the group. Questions that surrounded our concept included: How the audience would move towards the central, darkest and loudest point of Pablo’s inverted pyramid? How would physical vertical ascension of the audience be achieved? What materiality and if, how would this change to evoke a sense of freedom or ascension to the afterlife? In order to answer these questions, we split off briefly to produce a variety of sketch suggestions.

Throughout this process, we preserved the concept of slowing emerging from the maze invoked a sense of new freedom to represent the successful ascension to the afterlife. Our sketches provided a range of conceptual solutions. We suggested either moving the centre of the inverted pyramid to the side of the room, or creating a narrowing dark corridor so that the experience started in the darkest, loudest part. The central starting ‘pod’ would experience a variety of clashing sounds which would disperse into individual components in different points in the maze. In terms of the physical vertical ascension, it became clear that the best way of achieving this was a slight incline and ramp from the centre of the maze upwards and outwards to the edge, where there would also be extra steps leading to a balcony-like overlook, to cultivate a sense of achievement from the participatory audience members, also providing them with an opportunity to look over and visualise their path from above.

We also decided that the materiality of the ‘pods’ would change gradually from dark, harsh solid timber to a more delicate, transparent fabric around the exterior. The exterior of the maze was designed to be a space of almost calm, serenity and openness in contrast to the central dark, loud, and disorientating space. We discussed the potential for the pods to move, to add even greater disorientation and difficulty in manoeuvring the maze, however felt as though this would also provide a hazard if pods were moved unintentionally by visitors.

In Group 3, we developed Ulisha’s circular form with the collective idea of a labyrinth to represent the difficult path of life before achieving ascension. We felt the production should be an induvial experience to heighten senses and remove any form of “grounding” so to filter the audience Emily designed a funnelling system before entering the space. The collaging and sensory activities, completed before this week, inspired other features of the design. For example, we explored touch, due Rebecca’s collage of different texture, and so throughout the experience, either on the floor or on the walls, we chose to have different materials with different surfaces. The materials would be rough around the outside of the labyrinth and get smoother as you make your want toward the centre where you would experience the ascension. Touch along with sound would guide the audience through as indicators on when they are close to the centre and to heighten these senses we had the idea of having the audience blindfolded. To bring in the Egyptian research we had done, Miles suggested having the smell that Princess Shebensopdet had mentioned on her statue that she wanted to be gifted, myrrh. These were only a few ideas from a wide variety that this group had discussed and collated. We will continue to research and progress our idea for next week through drawings, precedents, and sensory experiences, collaborating on Slack. 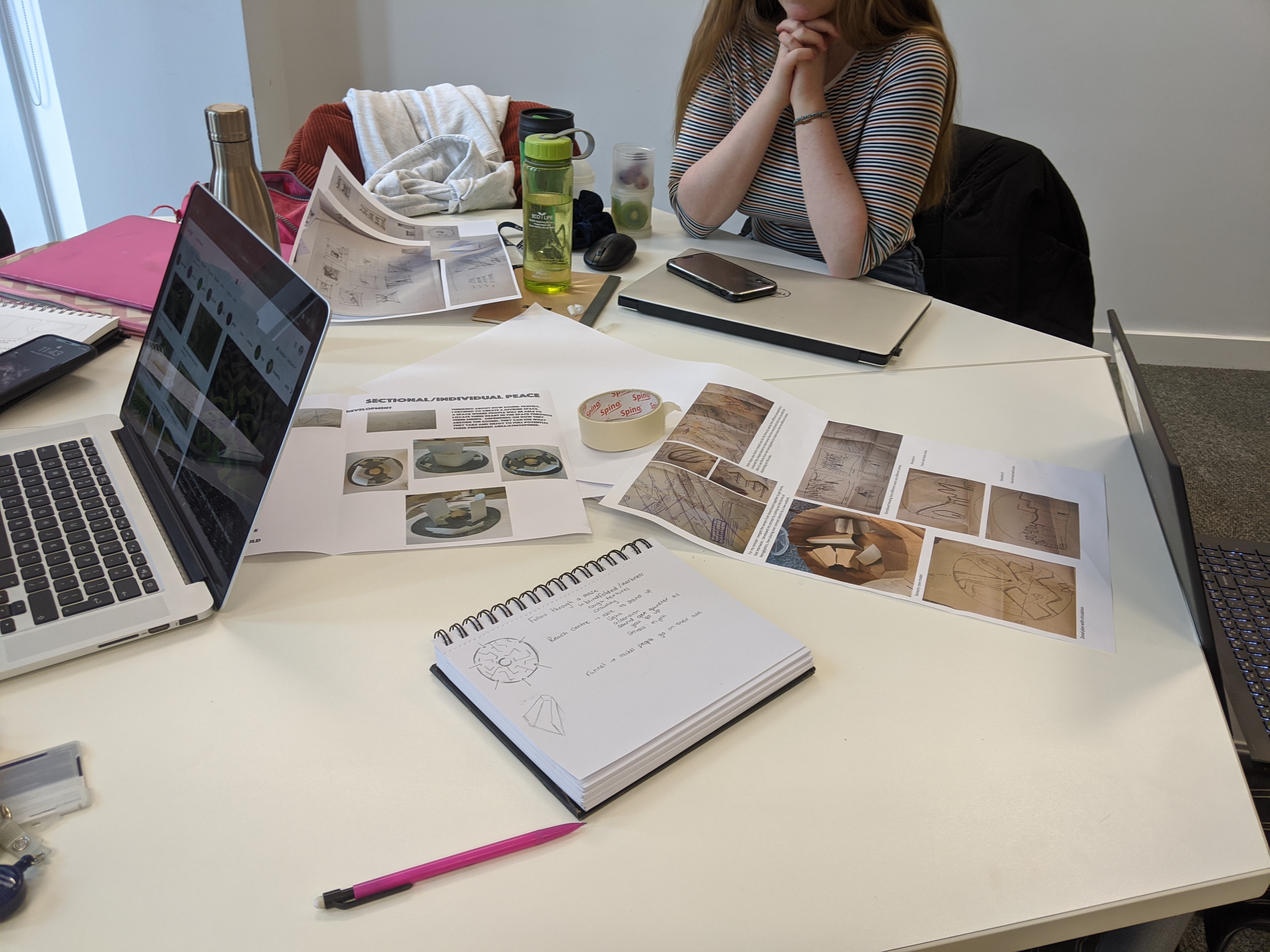