After viewing the site, I was interested in the users that actually used and traveled through the site, from this I went back to the site to view the users of the site, I observed many people using the site for exercise including runners, cyclists etc. From this the group started to discuss different ideas of products with the users in mind.

Some of the initial ideas include, a cyclist track, a lighting element in the water as a landmark, and a lighting element that was used as a map to identify where you were. We talked in our group about making our product something that wouldn’t make people stop on the site and congregate, as this would block the normal day to day use of the site such as for runners and cyclists.

Movement of the site interested us and from this a movement map was created as shown below. Blue is canal movement, Green is Runners, Yellow is cyclists and red is access points, from this we made conclusions that the site is very narrow for the existing users and there was a lot of free space in the canal waters.

Some of the things I noticed were that some areas of the site was very dark whereas other parts had quite a decent amount of light coming from the surrounding university buildings (Curzon extension and student accommodation) yet still not providing enough light to call it a safe area to be in. Another thing that really caught my attention was the way the lights reflected on the water which gave off a really nice effect. 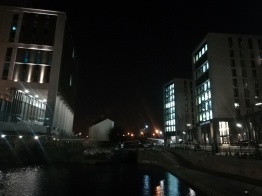 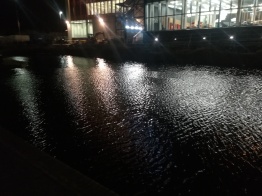 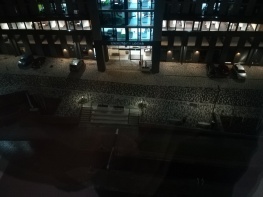 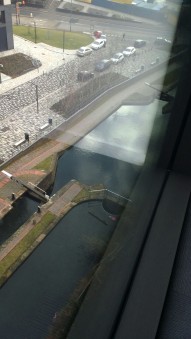 We also started to think about what we wanted the lighting to achieve, to either be functional or an installation. After looking at the night photos we decided to pursue the idea of movement through the interaction of light and water, potentially creating a different experience depending on the time of day, with the lighting hidden during the day and becoming visible at night.