In order for us to be able to make a physical clay brick, we would first need to create the wooden mould for the brick we have designed.

To make the mould we had to make use of the workshop, to use the following tools:

The dimensions used for our physical mould were increased by 10%. This allowed for the shrinkage when drying.

Each piece had a small tolerance so that they were cut as accurately as possible, and were sanded down to the exact size.

We used metal brackets with two holes for a stronger and more secure joint for our mould. Screws are drilled into place with a hand drill or a screwdriver and strong person. 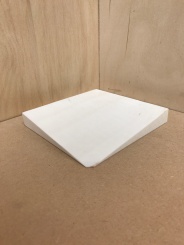 In order to create the chamfered brick facade, we 3D printed a mould to get a smooth surface.

Alternative method to create chamfered brick facade, using a metal plate fixed at an angle. The change in material allows for a very smooth surface meaning less chance of the clay sticking to the mould.