Beginning the module, it became apparent that most of the applicants, Architecture students as textile students, chose the module to improve their understanding of 3D modelling programmes and understanding its potential in the industry. A quick dezeen search, already offers many hits of 3D printed dresses and designs from burlesque dresses to modern day chainmail. There little doubt, that once the technology is improved in speed and cost as well as the material properties themselves, that this type of fashion will filter down into mainstream society. This becoming ever more likely with the growing discussion on the internet of things and integrating technology on the body let alone on our garments. Take Google’s Project Jacquard which is helping weave conductive threads into garments which will allow the user to use the textile like a digital screen, merging the realms of software development and textiles.

Initially the idea of 3D printing, I found less gripping than exploring other materials. 3D printed goods do not hold any memories or scars of a previous life.  Fundamentally they lack the textures that captivates a toddler.  Unlike wood. Wood is a material that I grew up with, it was at the wooden dining table that is present in most of my childhood memories and as a material, it has a memory itself, it can be worked, reworked and show signs of aging. Wood is flexible, but not the kind of flexible that would make for comfortable clothes. Whilst wandering around the sample section at work (architectural office), it was easy to imagine that these samples could be fashioned into garments in some way. Image of the samples to follow. I began exploring the idea of laser cutting wood and examples that already exist. Amongst them, the delicate laser cut examples by Stefanie Nieuwenhuys (Rinehart, 2011) and the triagular lasercut wooden coats by  Sruli Recht (Howarth, 2013). It would be nice to solely use these materials without the need for a textile as a base. To touch the materials with the skin.

The second interest that I really want to explore is the idea or inter-acting and ‘clever’clothes. Fitted with sensors that would be able to adapt to their atmosphere or surroundings. Initially captivated by the kinetic facades by Ned Kahn at a science centre in Winterthur, Switzerland.
http://nedkahn.com/portfolio/technorama-facade-video/

The facade for the building shows the movement of the wind with thousands of aluminium plates. An example of many, this facade is truly mesmerising and makes you aware the nature around a building more than the building itself. Again, a quick google search throws back thousands of hits of attire which changes due to sensors. Some amusing examples is a dress that becomes see-through when you are nervous, a dress with leaf-like shingles that shed in different seasons and a dress which can sense were your eyes are looking and move lights to that place. The opportunities are truly endless. No doubt, there exists sport clothes that allow for cooling down the body when perspiring and warming the body when it is warm.

Our aim for Wednesday 28th Oct is to come with examples of patterns and materials and first attempts:

I would like to create a fusion of interactive and functional clothing which can be both elegant and adaptable.
Inspired initially from a watch strap and fixing: 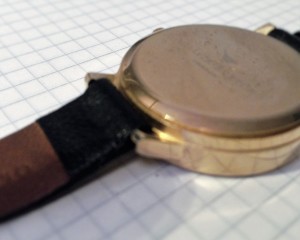 My initial thought is to create a module that can be tesselated, initially triangular.  These modules will have either a continuous frame or smaller clips to allow the user to fix them together. The triangular module and attachment would always be the same. Initial thoughts are a 3D printed triangle with a ball and socket joint that will allow movement in multiple directions, this can then be cast into a metal or a stronger material after many tests. The cladding of the triangles would depend on the user’s activities. Basic patterns would have to be available, and perhaps, these could be on an online open-source resource that would allow the user to clip their attire together, making it fit to their individual sizes and removing the need to be skilled at sewing or dress making. It would be great if the frames would also be more easily and cost effectively attainable by anyone to allow the possibility of the shapes and sizes to be different. Or, alternatively, devising a quick method to allow the fixing of any material to the triangles. 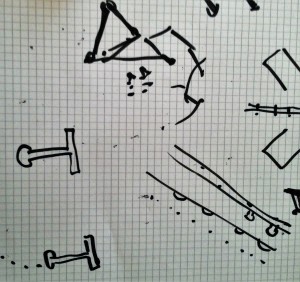 Preparing the pattern on autocad, guillotining, laser-cutting and scoring patterns onto faux leather: 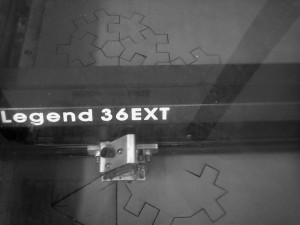 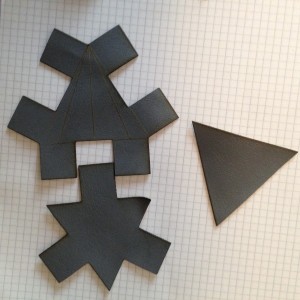 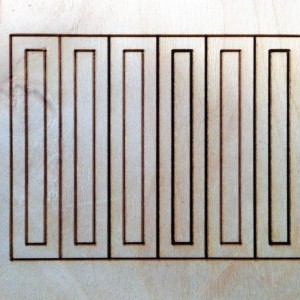 Still need to attempt to fix the fabric to the frame and consider the gap between the triangles and how that could be minimised or played with and begin considering the fixings with the help of the textiles student for the first session.
It would be great to create a system that could allow different textures to form a garment made by literally anyone!