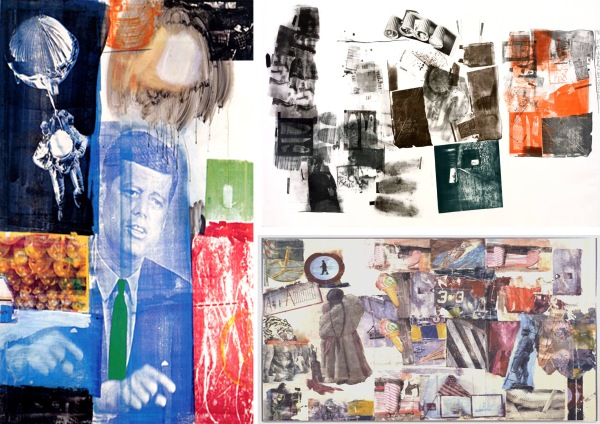 Based on Hal Foster’s text that I studied last week about the ‘An Archival Impulse //2004 , Hal Foster explains the meaning of art archive , the main role of it to our social and political increase .Also Foster describes the differences between the archive through pre-war – period and post –war-period . Archive during pre-war period accommodates artist work that was extended both in politically and technically meanings. Therefore archives during post-war period are more variously active especially as appropriate image and serial formats become common idioms.
Foster through his description of the differences between the post and pre-war period mentioned some artist work like Robert Rauschenberg, Douglas Cordon and so on. While I was looking the details of the artistic I found very interesting the Robert Rauschenberg work.
Robert Rauschenberg (1925- 2008)
Robert is an America artist and Graphic artists. Rauschenberg belongs to Pop Art movement. In addition Robert called as a ‘neo-Dadaist’ by his friend and colleagues Jasper Johns. R .Smith (1995-02-10). “Art in Review”. New York Times.
Characteristics of Robert Rauschenberg:
Robert Rauschenberg’s work is characterized by the series of collages. He uses several objects such as are boxes, chairs and others. Robert Rauschenberg paint on newspaper and fabric that he uses it later as a canvas surface .Sculpture has an important roles in Robert’s work. In 1958 Robert Rauschenberg started to use solvent – transfer techniques. Robert used glossy magazines, photographic to make drawn and then he combined it with his own drawing .Furthermore Robert use a silkscreen techniques which through of it , he can over painting a various picture and then connect it with canvas. The silkscreen use by Rauschenberg allows him to connect more than one photograph. Rauschenberg photographs depict his experience through his travels around the world and archive stuff. Rauschenberg apart from his own photographs, he uses newspapers, advertisements and others, that describe the political, social, economical and technological development for each period.