Scheme B was developed after receiving feedback from Stuart Whipps and Mike Dring. The changes that were required related to the height of the fins, the materiality and the creating of a pathway between the fins.
The height of the fins was seen as an issue due to them previously (Scheme A) blocking views to the castle on top of the hill, it was decided this was an issue and as a result the height of the fins changed to 1.5m, 2.5m and 1m over the gradient of the hill.
The second issue of materiality was made due to the concrete fins appearing to be to permanent, and the fact that they would create a very cold aggressive entrance as visitors entered to be confronted with a wall. It was decided within the group that the material should instead be gabion cages with an infil of small rocks at the bottom to provide structural stability.
The final issue was the inability for people to exit the exhibition if they did not want to view the works, this opposed one of our initial ideas to control the route the public took. Although it opposed our desire to control the public, the point was addressed with a walkway between each of the 3 fins being created. The walkways and shapes of the fins still allowed us as a group to control the flow of those wishing to see the exhibited work, but also allowed members of the public who did not want to see the exhibition to exit. The compromise made was fair to bot parties involved (Designers + public) 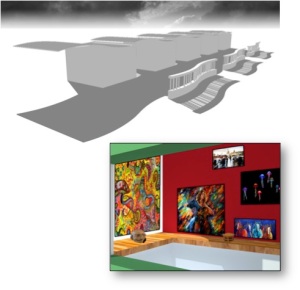